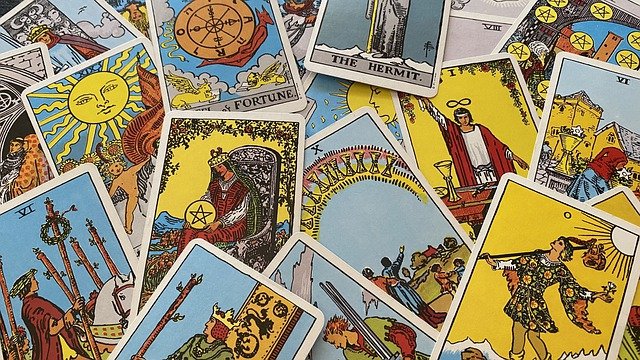 The tarot cards can be used in psychic reading to discover an individual’s inner strength. The tarot can give warning of an upcoming event, whether it is bad or good, so that we can be well prepared to deal with the situation, tarot can also suggest ways out of ongoing negative situations. Psychic readers can obtain feelings about a client by focusing on the cards and being open to receiving information from the other side, this allows the tarot to guide the client towards finding a balance in their life.

The focus of this card is on World issues or world shaking events, encounters and gatherings, travel, change, risks and new opportunities, but also on restriction wall or blocks.

For those who are not familiar with tarot cards, there are 78 cards in a deck that are divided into what are known as the Major Arcana and the Minor Arcana.

The Major Arcana is comprised of 22 cards, and includes cards like the Magician, the Emperor, the Star, the Chariot, Judgment, Strength, and Death.

The Minor Arcana cards are divided into four suits:

Within the Minor Arcana, there are numbered cards, Queens, and Kings.

Reading tarot cards involves divining the meaning of each card in the context in which it is dealt. Tarot spreads (the way cards are dealt) include the Celtic cross, the Astrological spread, and the Horseshoe spread. Each tarot card has a meaning, a certain appearance, and a symbolized interpretation. It also has correspondences to a certain path, trump, Hebrew letter, and Zodiac element planet, as well as deities, animals, and plants.